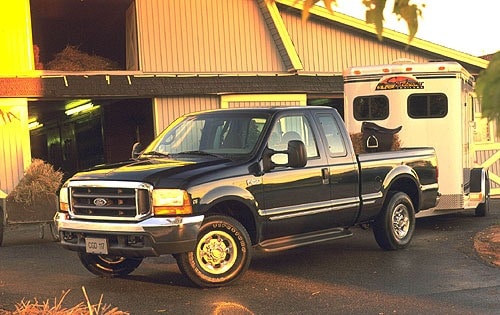 Even in 2022 diesel trucks are not going away, in fact I think they are actually getting more popular. The rising gas prices have started to sour the tase for prospective gas truck buyers as they look to something with better fuel economy. On the flip side, the increase in gas prices have also made the diesel prices more appealing.

This is great news if you are in the market for a diesel pickup truck, but with COVID delays still pushing back orders on new truck where are you getting to get one? Well, honestly your best bet is to consider going for a used one. With that said, here are our top 5 most reliable diesel pickup trucks you can buy on the used car market.

It really doesn’t get more reliable than Ford’s 7.3L V8 Power Stroke engine that they put into F-250 and F-350 Super Duty pickup trucks from 1999 to 2003. This is a simple engine that offers lots of power to do whatever you want or need. To be exact, the 7.3L V8 Power Stroke engine will put out 235-275 horsepower (depending on the model year) and 500-525lb feet of torque (again depending on the model year). Even better it’s mated to a reliable transmission as it’ll either be the 4R100 five-speed automatic or the ZF S6-650 six-speed manual gearbox. Both of these transmissions have been proven to be incredibly reliable. The rest of the truck was equally reliable and there is a good reason you still see so many of these kicking around doing heavy work.

The oldest truck on the list is the 1994-1998 Dodge Ram 2500/3500 and I hope you aren’t sleeping on it. These trucks feature the 5.9L inline 6-cylinder Cummins diesel. This motor is also known more simply as the “12-Valve” Cummins and it also happened to be the first member of the Cummins’ B-Series to be used in light trucks. There isn’t much to these trucks from working on the engine to the exterior and interior finishes. While some might find that lacklustre, to others it might be exactly what they want. The exterior has aged well, and the engine is so reliable that these are actually fetching big money these days at auctions.

From 2001 to 2004 Chevrolet Silverado and GMC Sierra 2500/3500 diesel trucks were equipped with the legendary 6.6L V8 Duramax LB7. This was a pre-emissions motor that replaced the old 6.5L V8 Detroit Diesel engine and it certainly set the tone. It produced 300 horsepower and 520lb feet of torque but still achieved 20+ mpg of fuel economy. The Duramax was mated to the Allison 1000 five-speed automatic transmission which is an incredible transmission on its own. The Duramax engine and the Allison 1000 transmission are also fairly cheap to maintain which makes everything one incredible package. Out of all the trucks on this list I don’t think as many also ensured the ride was as comfortable thanks to an independent front suspension and the IFS/rear leaf spring combination. For what it’s worth, these also just happened to age so well.

The 2006-2007 Chevrolet Silverado and GMC Sierra’s built off the success of the 2001-2004 model years and continued with the Duramax platform. However, for 2006-2007 the trucks featured the 6.6L V8 Duromax LBZ engine which was basically the LB7 on steroids. It pumped out 360 horsepower and 650lb feet of torque. Like the 2001-2004 model years, the 2006-2007 Duramax’s were mated to the Allison 1000 five-speed transmission or to a ZF6 six-speed manual transmission. Both transmission choices are also incredibly reliable. The appearance of the 2006-2007 Chevrolet Silverado and GMC Sierra pickup trucks are an acquired taste but honestly, I think they are aging well.

In 2017, Nissan introduced their heavier duty pickup truck with the Nissan Titan XD which was meant to compete in the three-quarter-ton and half-ton trucks. They launched the truck with a Diesel engine as n opton and that just happened to be 5.0L V8 turbocharged Cummins Diesel engine. It produced 310 horsepower and 555lb feet of torque which was respectable for the time and still is today. Being a Cummins, these things are largely reliable and many have racked up 100,000s of miles without issues. Nissan wanted to make a big splash in the truck market to try to gain some sort of footing so they made the Titan XD beautiful and rugged at the same time on the outside. Happy motoring

Why a Dodge Ram Cummins 12V is a great buy