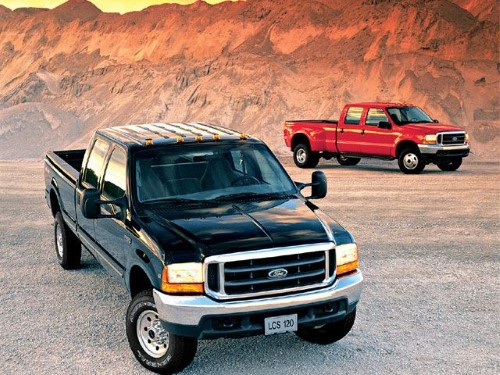 If you are in the market for a used truck you are probably weighing the pros and cons of going for a diesel over a gas truck. Many people go diesel for the extra fuel efficiency, as the typical diesel engine truck gets about 20 percent more miles per gallon than a gas truck. Diesel trucks have more torque which means they have much better towing capabilities and limits.

If you are considering towing heavy, you should seriously be looking at a diesel. Finally, diesel trucks can be more reliable as they have fewer parts over a gas truck which has things like spark plugs and distributors. However, used diesel trucks can also be money pits depending on the make, model, model year, and of course maintenance history. I’ll give you 3 used diesel trucks that you can’t go wrong with! Also disclaimer, before I start getting hurtful emails from brand loyalists, these are in no particular order.

The 1994-2003 Ford F250/F350 model years span two generations of trucks; the ninth and tenth generations of the Ford F-Series. If you are looking to go diesel, there is no better model year for trucks in terms of engines and features. The ninth and tenth generations of F250/F350 come nicely equipped and are both still stylish. As far as engines, the 7.3 Powerstroke diesel engine has been used in everything from pickup trucks to ambulances to military vehicles and with good reason. These are reliable engines that can be easy to work on with moderate skills. Both the ninth and tenth generations of F250/F350 will have strategically be equipped with the pre-emissions version of the 7.3 Powerstroke diesel which gives good power and decent fuel economy. The parts are cheap and you can easily tun these for more power. I’m a little bias in that I owned a 2001 Ford F250 that hit 320,000 miles before I got rid of it.

I have had to be very specific with the Chevy diesels and for good reason. The first generation, produced from 1999-2007, are great trucks and I actually really dig the styling. However for the Duramax, anything prior to the 2006 will have issues with injector failures which are fixed in the 2006 and 2007 model. You don’t want to go into the second generation of the Silverado as then you get into all the emissions junk. As such, you’re best bet for a Chevy diesel is to stick to the 2006-2007 Chevrolet Silverado 2500 Duramax LBZ. They make great power, have good fuel economy and are easy to work on (much easier than the Ford 7.3 Powerstroke Diesel).

If you were looking for a no frills, dead reliable diesel than the 1989-1998 Dodge Ram 2500/3500 is your best choice. They are powered by the Cummins 12V diesel motor which is easily the simplest modern day diesel engine I’ve ever encountered. There is literally nothing complicated to the 1989-1998 Cummins 12V, no modules or computer parts and no over engineered emissions crap. While they certainly don’t make high horsepower numbers, they can be tuned for it without much work. It’s also easy to slap on some bigger turbos and have at it. Don’t worry, the Cummins 12V can take a lot of a beating with very little care.