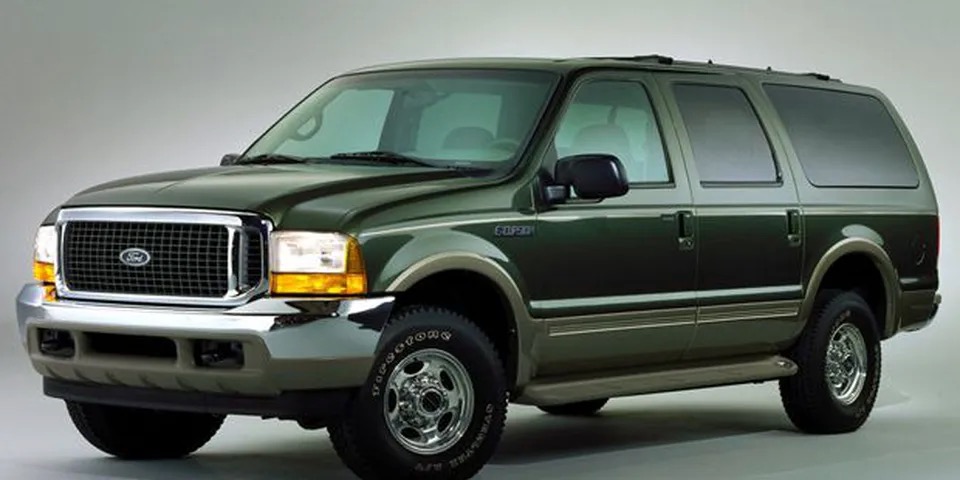 The Ford Excursion is a heavy duty (class 2) full-sized SUV that was being produced by Ford from 1999 to 2005 for model years 2000 to 2006. It is the longest and heaviest SUV ever to enter mass production and simply exemplified America’s thirst for big SUVs.

These things sold, around 190,000 were sold in the US from 1999 to 2005 (2006 model year was reserved for Mexico only) but unfortunately in the later years the sales really dwindled. In 2005, Ford sold just 16,283 units in the US which is why Ford ended up killing the Excursion. Ever since, people have been trying to rescue these things, while some perished through collisions others were sent to the Middle East as they made for excellent vehicles for mercenaries and VIPs. Without a doubt, decent examples are extremely rare which is why location 10 new Excursions just sitting in Dubai is even more strange.

Pictures of the 10 brand-new 2005 Ford Excursions have surfaced online, and it has people asking lots of questions. The pictures of these trucks first surfaced on a Facebook post which has since been removed but before they were removed, we were able to clarify a couple things. These are definitely brand new 2005 model year Ford Excursions. This alone is particularly interesting because I said before, 2005 was the worst sales year for the Excursion with just 16,283 units sold and here are 10 of those in perfect condition, well almost. It looks like eight of the ten are powered by the 6.8 liter Triton V10 while two are powered by the 6.0 liter PowerStroke turbo diesel V8. We can also confirm they are definitely sitting in a garage somewhere in the United Arab Emirates (UAE), probably belonging to someone extremely wealthy.

Now as far as condition, body wise they all look mint and well taken care of. The vehicles are all covered to protect them from dust and they are sitting in a garage so it’s not like they are exposed to any elements. One issue with them that can be confirmed would be the fuel pumps as when the fuel inside the eight 6.8 liter Triton V10 engine broke down it would have killed the fuel pumps. The two diesel PowerStroke engines though should be alright. It also appears are on jacks protecting important suspension components although I’m sure the tires have since passed their best days.Not much else is known about these but if you have more information please comment. Otherwise, appreciate these machines.

Why do people ditch supercars in Dubai, UAE?

How to approach a shop about damaging your wheels?