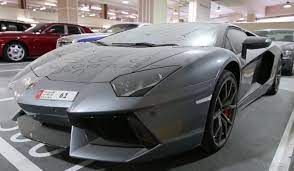 If you have seen supercars sitting abandoned in Dubai in spots like parking garages, impound lots and even the side of the road, you’re probably wondering why? I mean these are nice supercars, including the likes of Lamborghinis, Porsches, Bentleys, and even Ferraris. Current rough estimates put the number at approximately 2,500 cars being abandoned in Dubai every year. So why does this happen?

If you are thinking that the super wealthy citizens of Dubai are so rich that they just dump their super cars on the side of the road when they are bored of them, you are wrong. The issues is actually much deeper than that.

In Dubai they observe Sharia Law which means non-payment of debt is actually a criminal offence. There are also now bankruptcy laws, which means there is no protection to anyone who fails to make their payments. The most common debts are going to be credit cards, car notes and mortgages. You see if you do not make the payments, you actually face imprisonment and the jails in Dubai and the United Arab Emirates are intense. As a result, many people simply abandon their life and cars in Dubai and flee the country to avoid punishment for their missed payments.

Most locals understand the laws and have for the most part avoided having to abandon their cars on the side of the road on a large scale. While they are certainly part of the problem, locals understand the laws and avoid these issues, however foreigners are less understanding and thus get themselves into some uncomfortable situations. In Western culture, debt is not really seen as a problem on the scale it can be in Dubai. So when foreigners arrive, they take loans and get fancy supercars that they can barely afford. Suddenly the finances don’t make sense anymore or perhaps they lose their job and now they are unable to make the payments. As a result, many foreigners simply leave the cars on the side of the road and run to the airports to flee to their home country.

Eventually these vehicles are located and towed by the authorities. They are then auctioned off in the hopes of recouping as much of the debt as they can. The good news is, if you are willing to deal with the hassle of importing a vehicle from Dubai or pay a broker to do it for you, you can probably get a good deal or at least something unique!

How to avoid door dings

What does it mean to sell a car as-is?