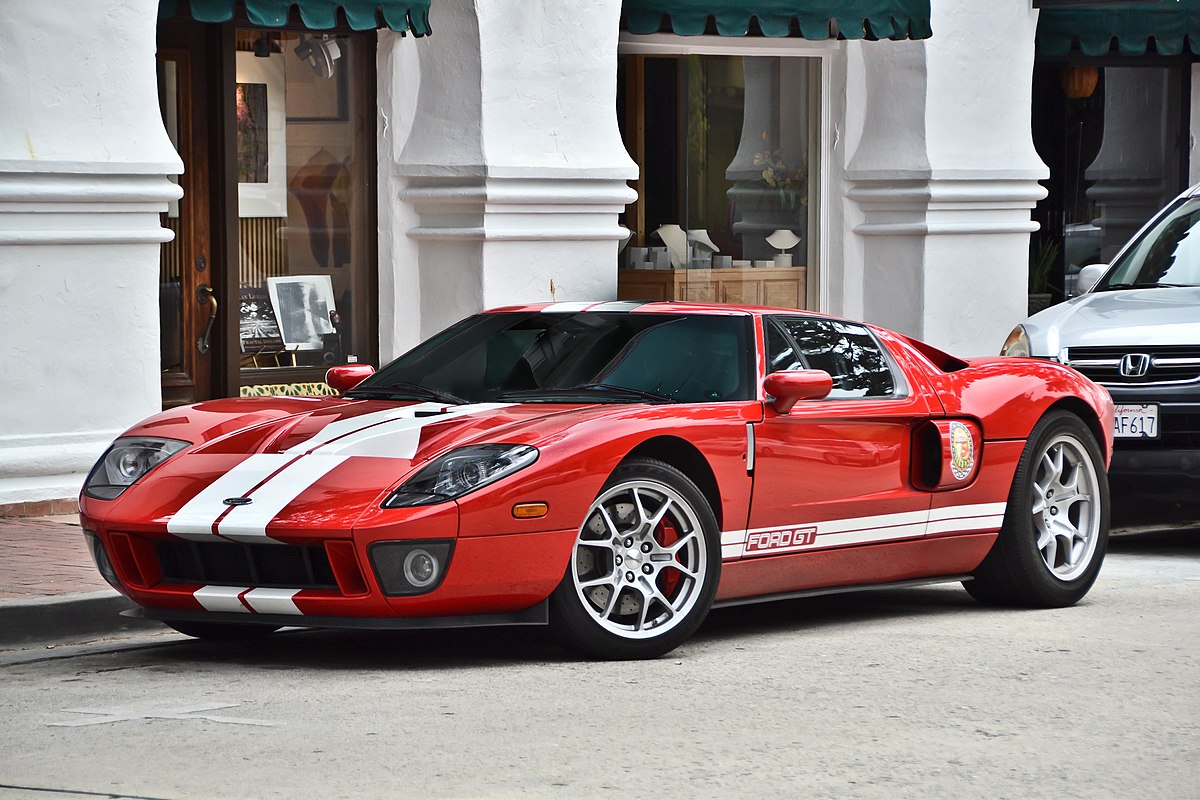 Recently we featured a Ford GT40 that was up for auction so that is the inspiration for today’s Throwback Thursday, the Ford GT.

The Ford GT is a mid-engine two seater sports car that hit production for the 2005 model year. The GT focuses on Ford’s GT40, a historically significant vehicle when considering the racing world as it won the 24 Hours of Le Mans four times consecutively. Ford used the GT40 and incorporated the heritage of the GT40 to market the GT much like they did with the Mustang and it worked. At the 2002 North American Auto Show Ford unveiled the Gt concept car which at the time was only known as the GT40 Concept and it was extremely well received. Using the GT40 concept car, Ford launched the first generation of the GT.

The Ford GT is similar in appearance to the original GT40 but is significantly bigger both in width and height. Apart from the physical appearances, the GT actually shares very little on the inside to the GT40 and that’s thanks to decades of automotive engineering. The first generation of the GT included many new technologies such as a superplastic-formed frame, a friction stir welded center tunnel, aluminum body panels, roll-bonded floor panels, a capless fuel filler system, and a magnesium center console amongst others. The brakes were four-piston aluminum Brembo calipers with cross-drilled and vented rotors at all four wheels.

Powering the first generation Ford GT was a 5.4 litre longitudinal rear mounted Modular V8 engine, that was supercharged. Much of the engine technology was inspired by the Ford Mustang SVT Cobra R and the Shelby GT500. The engine produced 550 horsepower and 500lb feet of torque, all mated to a 6-speed manual transmission. As far as performance, the Ford GT did 0=60mph in 3.3 seconds, hitting  the quarter mile in 11.8 seconds with a top speed of 205mph.

The second generation GT featured extensive development that was largely done in secret by Ford. Specifically, they reworked the aerodynamics of the vehicle to focus on low downforce and aerodynamic efficiency. As a result of this Ford GT designers created a teardrop profile often seen in Le Mans racing vehicles. Ford did not want to deviate too much from the history of the GT40 so the second generation looks much like the first generation and the GT40.

However, a big change for the second generation GT would be the power plant which is now a 3.5L V6 EcoBoost twin-turbocharged engine which produces 647 horsepower and 550lb feet of torque. These numbers were bumped up for the 2020 and newer model years, making 660 horsepower and 550lb feet of torque. This engine is mated to a 7 speed dual-clutch transmission. The second generation GT also changed the suspension system, which was now a pushrod suspension system. This system is hydraulically adjustable which allows the driver to make changes quickly. All of these changes allowed the second generation Ford GT to do the quarter mile in 10.8 seconds, hitting 0-60mph in 3 seconds flat.

I have no doubt the Ford GT will be a future classic just based on pedigree alone. When you consider production totals for the first generation, there are only 4,038 of these worldwide making them even more rare.