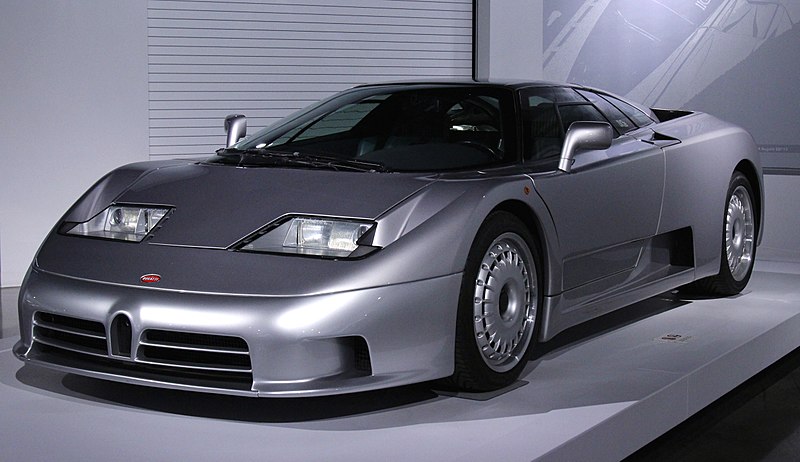 The Bugatti EB110 was a mid-engine sports car that Bugatti under “Bugatti Automobili S.p.A” produced from 1991 until 1995, which is when the company was liquidated. I spare you the history on Bugatti and that liquidation and focus on the EB110.

The development of the EB110 actually started in 1987 and was headed by Tiziano Benedetti, Achille Bevini and Oliviero Pedrazzi. The trio were not new to building cars together as they had worked on the Lamborghini Miura. Work progressed slowly and eventually a design was made but the Bugatti president did not approve. A second iteration of the vehicle was made and it was launched in 1991. There were a couple small tweaks that needed to be made afterwards but the EB 110 GT was revealed to the public in September 1991.

It was powered by a 60 value, quad-turbocharged V12 engine which had 12 individual throttle bodies and it was all wheel drive (AWD) based. The only transmission option was a 6 speed manual which allowed you to feel every one of the 553 horsepower and 451lb feet of torque. There was also a Super Sport version which had a tuned engine producing 603 horsepower and 479lb feet of torque.

The Bugatti EB 110 was fairly unique for the period in styling but it did attract the attention of several high profile celebrities and drivers such as Michael Schumacher who bought one in yellow. It saw great success in racing and at the time set a record for a 9-60mph time in 3.4 seconds. Unfortunately the bankruptcy and subsequent liquidation of Buggati Automobili S.p.A killed the entire project.