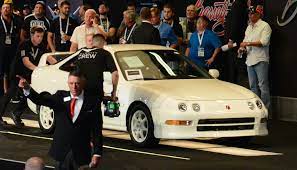 A couple of decades ago, it was rare to hear the words “Japanese collectible cars” but now don’t be surprised. There are many Japanese vehicles that have hit collector status, and many more will be joining the ranks as prices continue to sore. After all, there is a reason why Japanese companies like Toyota brought back the Supra nameplate or Acura brought back the NSX nameplate. There is still hope if you haven’t been able to get in on the Japanese collectibles as this list will show several models that are still attainable.

Ah the Miata, beloved for many memes on the internet, it is an excellent choice. It might not be the most powerful vehicle, featuring a 1.6L 4 cylinder engine that is good for 116 horsepower and 100lb feet of torque, but it is fun. The Miata weighs like nothing, and with it being a convertible it’s a blast to drive. The Miata handles exceptionally well around a track and with a manual transmission you can row your own gears. The aftermarket industry has exploded for the Miata so there are lots of options for bolt on parts to enhance your ride. The other nice thing about the Miata is the price with it being probably the cheapest vehicle on this list. You can find good examples, with 60-80,000 miles for about $9,000.

The MR2 was a two-seat, mid-engine, rear-wheel drive sports car that is the only mid-engine vehicle on this list. It was built over 3 generations from 1984 to 2007 but our preferred model years for the MR2 are going to be 1991-1993 for best collectability. There are several trim levels you can get in North America with the base MR2 featuring a 2.2L 5S-FE engine producing 130 horsepower and equipped with either a manual or automatic transmission. There was also the MR2 Turbo which will be the more desirable option featuring a turbocharged 2.0L 3S-GTE engine producing 200 horsepower and 200lb feet of torque, mated to a 5 speed transmission. They are quickly rising in value as their potential is being realized and maintenance is becoming easier. Good examples with about 80-90,000 miles can be had for about $25,000.

The Integra itself can be considered a classic at this point but we will only be covering the Type R as t is the most collectable. The Type R featured the B18C 4 cylinder engine producing 195 horsepower mated to a 5 speed manual transmission with a Helical LSD. These are extremely nimble vehicle that has a rev limiter set at 8,700 rpm. For a front wheel drive vehicle they handle incredibly well and are an absolute blast to drive. These can be had with good examples starting around $35,000.

Toyota had the Supra, Mazda the RX-7, and Nissan the 300ZX so it was only fair for Mitsubishi to get into the game too and they did with the 3000GT. They built the platform in partnership with Chrysler who launched their version under the Dodge brand with the Stealth nameplate. The VR-4 was built on a platform with a 4-cam 4-valve-per-cylinder twin turbocharged V6 engine with a 6 speed manual transmission. It also featured all-wheel drive, 4 wheel steering, and aerodynamic devices that would raise and lower themselves based on the speed the vehicle was going. A fairly cool and unique vehicle. A twin turbo model of either the 3000GT or the Stealth will set you back about $18-20,000. You might get more of a discount trying to find a Stealth over the 3000GT.