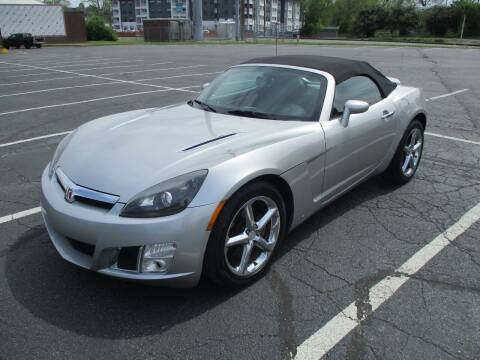 The Saturn Sky is a roadster produced by General Motors from 2007 to 2010 alongside the Pontiac Solstice, which was essentially the same vehicle under the Pontiac badge. You see in the mid 2000s, General Motors decided they wanted to tackle the roadster market and get competitive with some of the European and Japanese offerings. So they took the Kappa automobile platform which was heavily based off the Opel GT and created a roadster off it. GM choose the Saturn brand to give it more exciting product line and it did certainly turn some heads.

Yes. These are actually great cars. Even a base Saturn Sky with the 2.4L engine provides decent power. The Sky handles great and has a good road feel to it that feels almost Miata like. The ride quality is decent, and the car feels like it’s agile and can remain tight to the road. If you need more power, you can easily find a 2L turbocharged engine. For the mechanically inclined, there is also a great community for the Saturn Sky that will provide details on how you can even swap the 2L in place of the 2.4L should you only be able to find one of those. Then there is the styling, which is great inside and out. Although the interior will feature many cheaper GM parts, from vehicles suchas the Cobalt, it actually looks much nicer in the Saturn Sky.

So what do these cost? You can still find decent examples of these with 80,000 miles and a 5 speed manual for about $5,000 across the country. If you want a Red Line Sky, you’ll end up going up to about $7,000-$10,000. I predict these will continue to raise as at that price point they seemed to have largely bottomed out. The “community” for these has started to grow which tells me they are becoming more popular with the tuners and modified folks. If you have the chance, get a Sky today before the prices skyrocket on them.

The Pontiac Aztek, a future classic