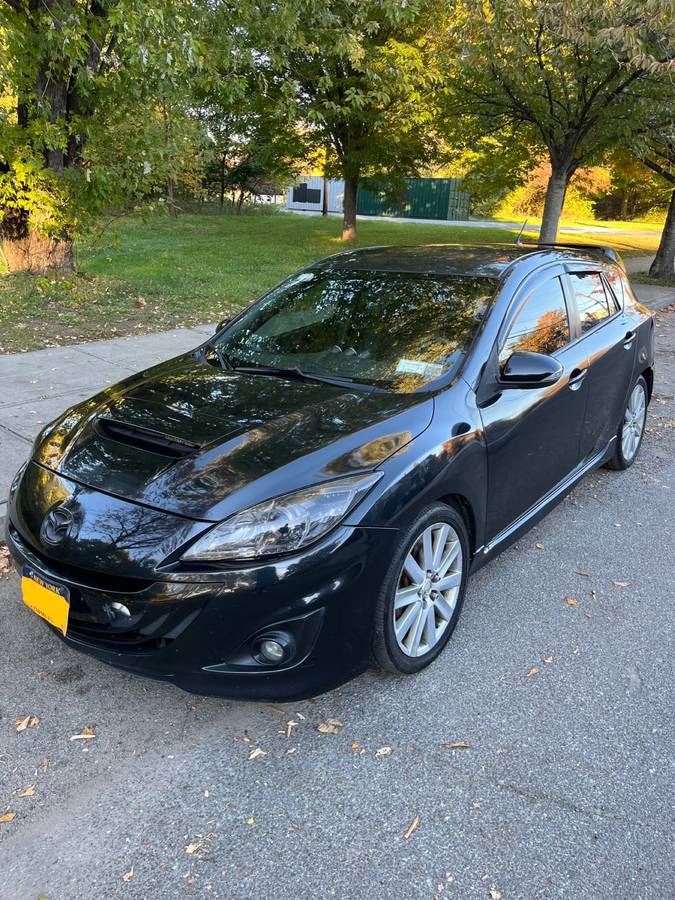 Mazda has always been a performance driven brand and had utilized the Mazdaspeed division to do so up until 2020. The lineup really took off in 2003 when Mazda debuted the Mazdaspeed Protege model and form there the popularity caused consumer demand to push out more models. In 2007, Mazdaspeed released the Mazdaspeed3 which was offering 263 horsepower and 280lb feet of torque making it the most powerful Mazda 3 available. At the time, it was also the most powerful car in it’s class. These vehicles are getting tougher to find but we have stumbled upon one for sale in New York.

This example is a 2010 vintage and is finished in a black exterior with a black interior. The seller notes it has only 115,000 miles on the clock and comes with the highly desired manual transmission.

There is some exterior work that will be required as the vehicle has damage to the rear bumper and rear passenger door. Nothing too crazy, but probably about $1,500 in body work. The seller notes this vehicle has been in a prior accident where the front airbags deployed and it sustained damage to the front left fender. Based on the photos it looks like it was fixed properly, although the rims on it are now the rims from a first generation Mazdaspeed 3.

On the inside, the vehicle does look good minus the headliner which will need some work. Again, nothing too crazy to do here but some work to get it perfect or a replacement might be the better way to go. The factory radio has power but no sound from all 4 speakers. The sound system has been upgraded so it has a 10 inch single sub in the trunk and an amplifier under the front passenger seat. Apparently the seller believes it might just need the speakers on the four doors changed. There is a custom gauge mount that was also installed which includes boost gauge, air fuel ratio gauge, and oil pressure gauge.

There are no performance modifications done apart from the addition of a magnaflow cat-back exhaust was also installed. Mechanically the vehicle is apparently in good condition but does need new front shocks.

This is a bit of a project or fixer upper for someone whose looking to enjoy a bit of compact car history. It is currently being offered for $5,000. You can find the listing here.