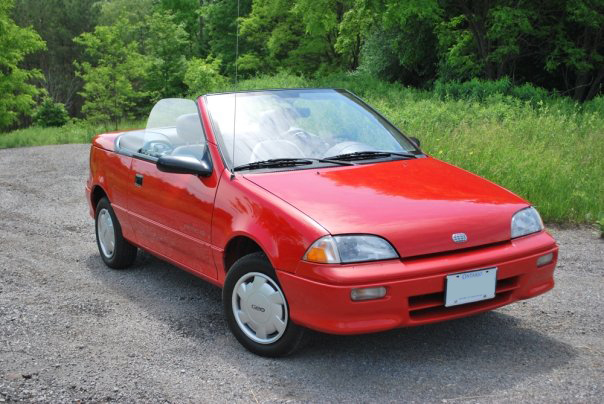 The Geo Metro was a joint project from 1989 to 1997 between General Motors and Suzuki for GM to try to break into the subcompact market. The Geo Metro was based on the Suzuki Cultus, and was essentially an exact clone with the Geo name plate slapped on it.

There were four body styles, including a three door hatchback, a four door sedan, five door hatchback and two door convertible. The first generation was produced from 1989 to 1995, along with the Suzuki Cultus at the Suzuki plant in Hamamatsu, Japan. In North America it replaced the Chevrolet Sprint model and was received with mild interest. Sales were moderate mostly due to the several various body styles that appealed to a variety of customers.

With Suzuki deciding to make a second generation of the vehicle, GM continued the partnership and in 1995 the second generation of the Geo Metro was born. It was introduced as a three door hatchback and four door sedan with a slightly longer wheelbase platform from the Suzuki Caltus which was not sold in North America. GM also designed they wanted the Geo Metro to fit more inline with the Chevrolet model line up. As such the second generation took styling cues from the Chevrolet Cavalier but still utilized the Suzuki M platform and their drivetrains.

For the second generation, GM also took over the manufacturing process and utilized the Ingersoll, Ontario plant in Canada. Overall, the second generation model was slightly bigger than the first generation and featured two engine options. The first was a three-cylinder, 1.0L engine. There was also a 1.3L inline four-cylinder engine which was the same as the Pontiac Firefly. The 1.0L three-cylinder engine produced 48 horsepower while the 1.3L inline four-cylinder engine offered 70 horsepower. Both options offered a 5 speed manual or a 3 speed automatic transmission.

Overall, both generations of the Geo Metro featured little to no “luxury” items. There was optional safety equipment such as anti-lock brakes, dual frontal airbags, and daytime running lights. However most models sold were not well equipped as buyers opted for the cheaper price tag to fit their tight budgets. Eventually sales dwindled and GM killed the Geo Metro and GM parted ways with it. Many people held onto the Geo Metro due to the incredible fuel economy it offered with it tying the Toyota Prius for best overall fuel economy at 42mpg or 5.6L/100km when Car and Driver compared a 1998 Metro against a 2009 Prius.

These days it’s harder to find a Metro in any respectable condition. There is no performance appeal to it, nor is there really any collectable factor at play. No one really wants to own a Geo Metro for any reason other than the fuel economy. But at this point, with hybrid technology on the rise and modern vehicles offering excellent fuel economy it makes little sense to locate a Geo Metro from 20+ years ago. This is especially true when you consider the abysmal safety rating of the Geo Metro… it’s not a classic.