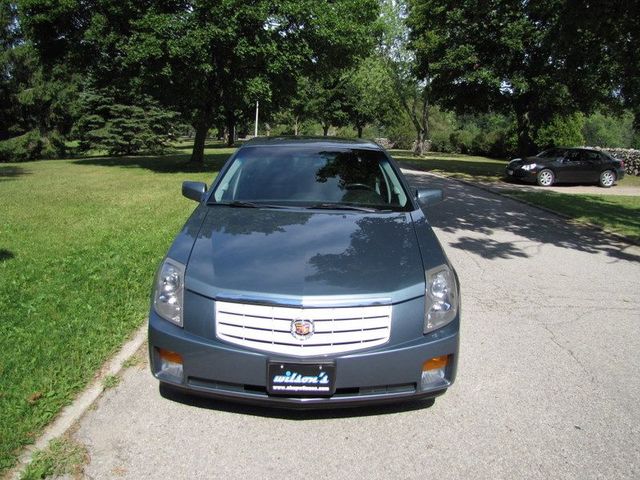 In 2002, Cadillac launched the CTS sedan built on GM’s new rear-wheel drive Sigma platform which included a fully independent suspension. It’s fairly unique in the sense it was the first Cadillac to be offered with a manual transmission since the 1988 Cadillac Cimarron. The first generation was produced from 2002 to 2007, and were assembled in Lansing, Michigan for the North America market. Critics were skeptical as the CTS was designed to replace the Opel based Catera, which in plain words was terrible on all accounts. But this is about the CTS, yes the CTS, not the CTS-V and not the Catera, so let me tell you why it’s a good idea.

First off, the Cadillac CTS had several different engine options depending on the model year. From 2002 to 2004, you could get a 3.2L LA3 V6 engine producing 220 horsepower, or past 2004 you could get the 3.6L DOHC V6 engine producing 255 horsepower and 252lb feet of torque. If you are more interested in rock solid reliability, then the 2.8L DOHC V6 is your best bet producing a respectable 210 horsepower and 194lb feet of torque. The engine options are all mated to a five speed automatic transmission or five speed manual transmission which is upgraded to a six speed manual for 2005-2007. These are all solid options, depending on what you can still find on the used market. There are known head gasket problems on the 3.6L V6 engine but nothing that isn’t difficult to fix or prepare for. The 2.8L is by far the most reliable, however only offered on the lower trim levels. For everything else, these engines are fairly simple motors and in true GM fashion used across several models so parts and engines are plentiful.

Apart from great engine choices you’re getting a well styled vehicle. The CTS combines some futuristic lines with the traditional Cadillac styling. No matter what trim level you select you are going to get a good looking vehicle. If you are looking at a base level CTS, you might want to consider some aftermarket options as the 16 inch aluminum wheels look out of place. On the other trim options you’ll end up with either 17 inch or 18 inch wheels which sit nicely on the vehicle.

On the inside, the CTS comes packed with options for it’s era. The dashboard has a center console that protrudes to the driver and really makes you feel like you are in a cockpit. The controls are all reasonably placed and designed for functionality. The best part of the CTS interior? ALL of the room. It’s actually incredible how much space there is in this vehicle. Depending on the trim level you go for, you can get additional options like a sunroof, navigation and more.

My favorite part of the CTS is the ride. It combines the comfort level of the Cadillac with some spirited driving. For a daily driver, the combination is right in between which is exactly where you want it. If you are looking to get your feet wet working on cars or are someone who just does their own work, you’ll love the CTS. No matter what trim level you get these are very easy to work on cars as I’ve mentioned already. Another example of just how easy they are to work on is an oil change which can be done without having to jack up the vehicle entirely, and instead just trying the wheels to the right allowing you to access the oil filter. The parts are cross used amongst other GM vehicles so they can be had easily and cheaply.  The best part is you can find these in good condition for $3,000-5,000 depending on what trim level and options you want. I recommend you get one sooner rather than later as they are slowly being beaten to death.

These 80s classics are still affordable