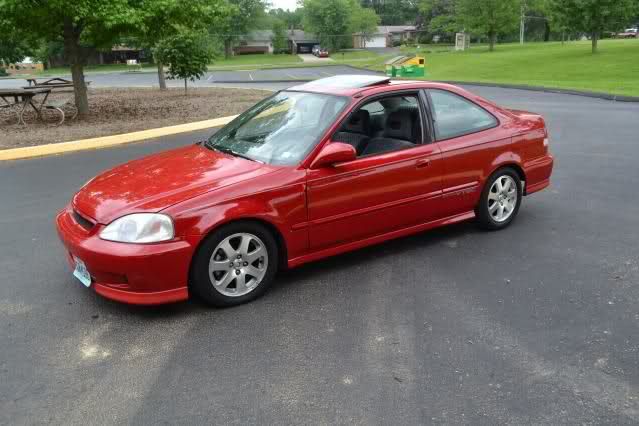 The Honda Civic has been around forever, well since 1972 to be exact, but the 6th generation model has to be the most iconic. The sixth generation Honda Civic was introduced in 1995 with 3-door hatchback, 4-door sedan and 2-door coupe body styles. Out of all the trim levels, the most important was the Si which reappeared in 1999 in the coupe trim.

Accelerating from 0-60 mph (97 km/h) in 7.1 seconds, the 1999 Civic Si trim package featured a 1.6-litre B16A2 engine that made 160 hp (119 kW) at 8,000 rpm and 111 ft-lbs of torque at 7,000 rpm. While similar to the powerplant in the Del Sol VTEC, the Civic Si saw some notable differences, which include a larger throttle body, improved intake manifold, strengthened connecting rods, low-friction/high-silicon pistons, a fully counterweighted crankshaft, and an exhaust system with larger-diameter piping. Due to its good fuel economy (27/31 city/hwy MPG), and a more popular coupe form, the trim package garnered a dedicated following in spite of its short production cycle.

Changes from the standard Civic included stiffer, progressive-rate springs, stiffer front and rear anti-roll bars, and a tower brace, which contributed to a flatter-cornering ride. It was available with a five-speed manual transmission only, the exhaust was upgraded to a 2 1/4 inch to reduce back pressure, standard equipment also including disc brakes all around. Aesthetic exterior changes from the LX/EX trims were minimal, with the Si trim package featuring a lower-profile and wider 15-inch wheel/tire package, a subtle chin-spoiler, painted side sills, and Si badging. There are power locks, power windows, a CD player, cruise control, air conditioning, power sunroof, and tilt steering. For the interior, the sixth generation Si also had tilt adjustment for the bottom cushion, a leather-wrapped steering wheel, remote keyless entry, and red-faced instrumentation with Si branding.

It is the Civic you will see become a future classic as prices have already started to rise for them.