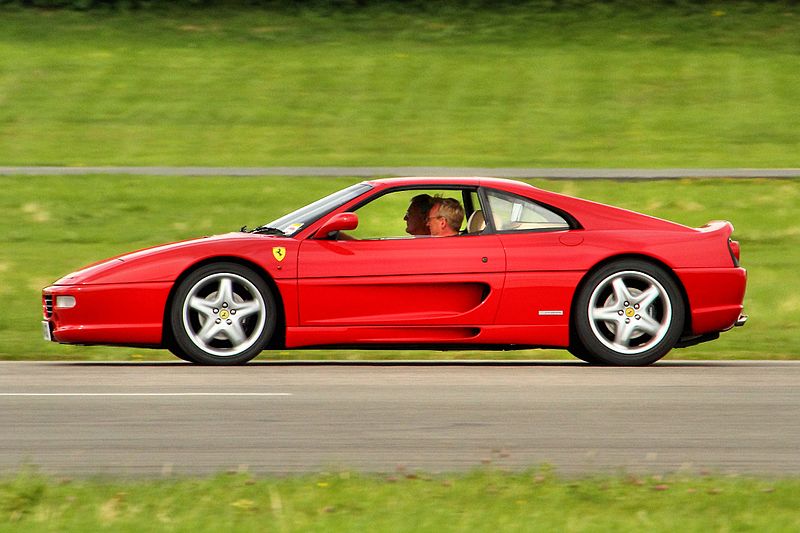 The Ferrari F355, also known as the Type F129, was produced by Ferrari from May 1994 to 1999. The F355 is a heavily revised 348 and was succeed by the Ferrari 360 in 1999. It was designed by Pininfarina and assembled in Maranello, Italy. The F355 would end up being available in three models, the Berlinetta, the Spider (convertible) and the GTS (targa top model). At launch initially, only the Berlinetta was available.

The Ferrari F355 notably saw Ferrari increase the displacement of the V8 from 3.4L to 3.5L and also the introduction of a 5 valve cylinder head. The new head allowed for better intake and produced considerably more power, generating 375 horsepower and 268lb feet of torque. The engine was mated to either a 6 speed manual transmission or a 6 speed F1 automated manual.

The entire frame is made of monocoque steel with a tubular steel rear sub-frame. The front and rear suspensions utilize independent, unequal-length wishbones and combined with anti-roll bars make the F355 handle nicely.

The F355 Berlinetta was the only model introduced in 1994 and originally only featured a 6 speed manual transmission. It was also the first model in 1997 to feature the F1 style 6 speed manual. The F355 Spider was released in 1995 as the convertible model with the F355 GTS which was the targa style model. All in, a total of 11,165 Ferrari F355s were ever produced.

As far as performance, the Ferrari F355 achieved 0-60 in 4.7 seconds and hit the quarter mile in 13 seconds flat. The Ferrari F355 was one of the most popular Ferrari’s of its time and you can still find them kicking around. The going rate for a good condition F355 is about $75,000 with 20,000 miles on the clock.